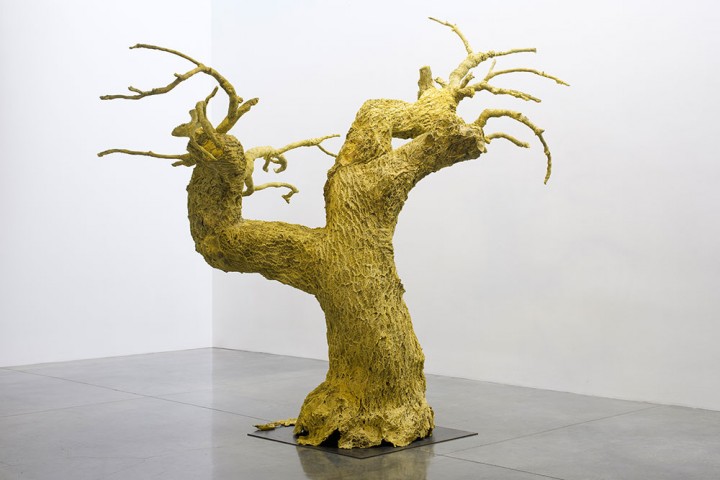 …Cast from the surface of a grisly, dying and overgrown apricot tree, the latex skin that she has pulled from her model is remarkably captivating. The texture of the rubber surface is very sumptuous, like some Leonardoesque parchment drawings of wrinkled old faces. The residual chunks of bark, fragments of bugs and other bits of embedded detritus in the rubber actually function as though they were a painterly effect. The industrial yellow color of the latex has a sallow pallor and seems both sickly and slightly romantic.

Once she cast the tree, Rath subsequently sutured the skin back together, inside out, over a metal structure bearing the same forms and disposition of the original plant. This inside-out tree was then placed in the middle of the gallery floor, turned toward the light coming in a skylight and facing toward the trees beyond. The tree itself is wizened and the look of the branches, ravaged by time and unsuccessful pruning, resembles a root system turned upside-down. Similar to the rhyzomatic philosophy traced out in the writings of Gilles Deleuze and Félix Guattari, Tree Peel is opposed to an arborescent or unidirectional conception of knowledge. The tree of Tree Peel is barely alive. It is stunted and without appeal as a model of the traditional family tree. Yet its growth and patterns of survival are more attuned to what really goes on in the so-called civilized world. Ideals have been pared away to make space for the dignity and suffering of survival in a dense urban environment…