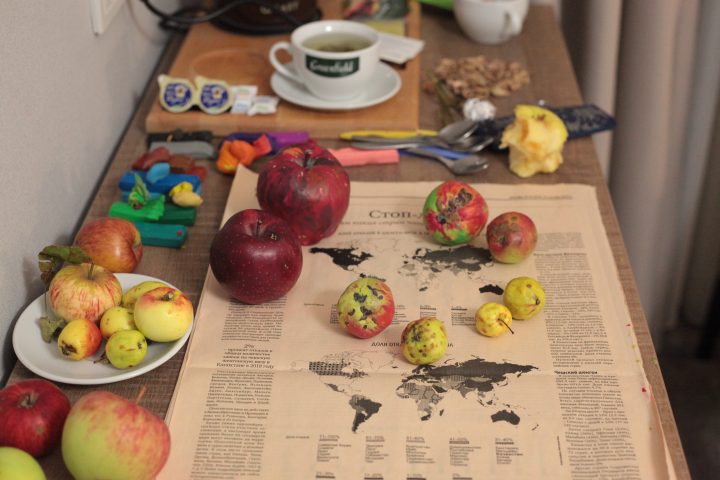 In 2019, I went to Kazakhstan to attend a conference in Almaty on the preservation last wild apple forests, which are located in the Tian Shan Mountains of Kazakhstan. Based on an expedition to these forests with Kazakh scientist Dr. Natalia Ogar and USDA plant physiologist Dr. Gayle Volk, I created work about the forests’ biodiversity and their plight within international politics.

The last wild apple forests contain Malus sieversii, the progenitor species of the edible apple Malus domestica. Endemic to Kazakhstan, this fruit, far from growing in orchard rows, flourishes in thickets of saplings next to hundred-year-old apple trees. The natural selection has provided miles of different fruit of wildly varying shapes and colors here.

Kazakhstan Elite premiered in Fruiting Bodies at Descanso Gardens in 2019.

Anticipating Red (no images), 2019
Jessica Rath with editor Stephanie Deumer and sound by Robert Hoehn
Video, rt: 9 minutes
Rather than framing the forests as vast collections of idealized specimens, Anticipating Red (no images) recognizes these forests as an evolving habitat propagated by bears feasting on the fruit for thousands of years yet constrained by human intervention.

With more than 50,000 genes – 20,000 more than humans – apple crossings through natural selection contain resilient genetic diversity now essential to assisting apple agricultural suffering from global warming. The Kazakhstan forests are fragmented because of the lack of infrastructure since the break-up of the Soviet Union and further genetically degraded by the orchards that the Soviets introduced during their occupation of Kazakh lands. This video is about the impossibility of imaging forests’ ecologies both because of their unseen intricacies and because of human folly. 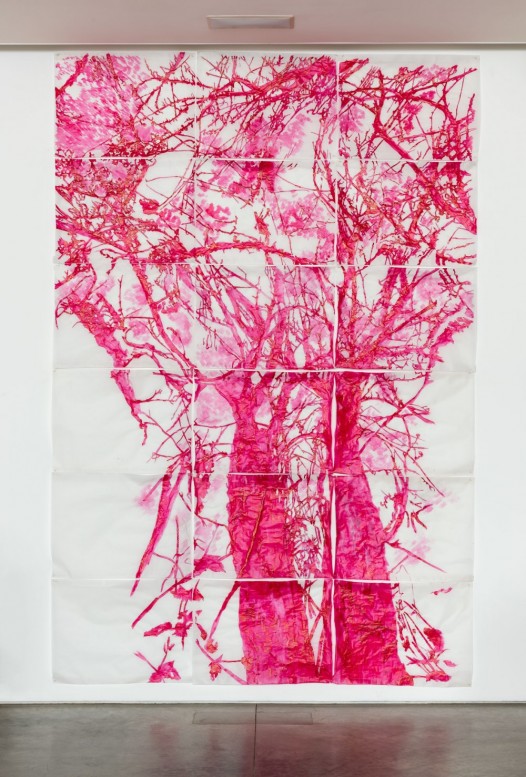 Anticipating Red (ink forest) is a tracing of entwining Malus sieversii at the cusp of fall. During the years as a Soviet republic (1920-1990), orchards of domesticated apples were planted deep in the “wild” apple forests thus these areas now contain hybridized trees. Humans have perennially admired apples’ red blush, but just looking at the fruit it’s hard to tell which is pure. The rare Malus niedwetzkyana is also in the forests and has a red-fleshed fruit whose deep purple leaves are an easier sign among thickets of apple trees in the Tian Shan. 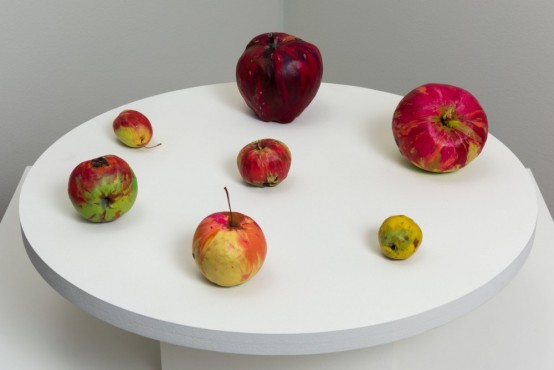 It is illegal for a traveler to bring fruit through United States Customs. Limited to children’s play clay from the local bazaar market, I sculpted these apples from the Malus sieversii forests to bring home replicas of a fleeting season of fruit. 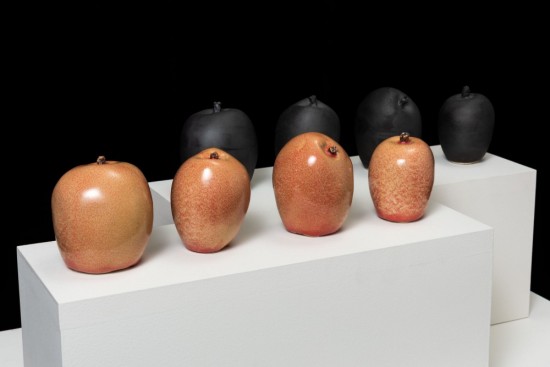 In the 1990s, American apple curator Philip Forsline and a team of researchers took grafts and seeds of Malus sieversiifrom the Kazakhstan forests and propagated them at the ARS/USDA Plant Genetics Resource Unit at Cornell University in Geneva, NY. In 2011, I visited this reserve of pure Malus sieversii, a genetic source that might be used now to repopulate the forests of Kazakhstan. These sculptures are about the first stories of these apples, a magical pink blushed fruit dependent on conservation efforts.